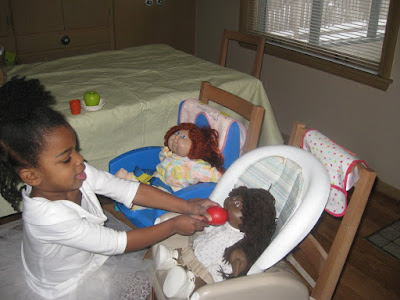 While I was feeding Christian this morning, Carysse was playing with her dolls. She then said, "Mommy, All my babies have special needs because they can't feed themselves." Kempton & I are open about Christian's disabilities with our "typical" children. Our daughters are privileged to have a brother with special needs which will help them (Lord willing!) to embrace God's good design in disability a lot sooner than if our family was not affected by disability. They are more blessed than they know!
Posted by Caryn at 2:01 PM 4 comments:

Who Actually Has The Disability?

Our family was sick all last week so I missed posting on my 1st born's birthday. His special day was February 10! This post is dedicated to Christian Anthony Turner.

1) He is himself at all times. You always know how he's feeling. He doesn't ever put on his "happy face" so others around him will think everything is going well.

2) He is never a people pleaser. He never tries to impress others or act in a way to gain others approval. He never desires to come across like he's important or someone to be admired.

3) He is never two-faced. He is never hypocritical. What you see is what you get. He never puts on a facade.

4) He never praises himself or flaunts around trying to be seen or known; even though he has had several international appearances here and there. :-)

5) He is extremely content with what he already has. He never tries to keep up with the Joneses. He could care less about what others own. He never desires the latest fads, fashions, or anyone else's fortunes.

6) He never gets bored with the daily routine. He actually prefers the simple life. He never tries to "escape" in his mind through blogging, tweeting, or facebooking. He is satisfied by just being alive.

7) He is never anxious about tomorrow (or the next minute or hour). Even though he depends on others for all of his care, he never is fearful that he won't be taken care of. He never doubts that someone will be there. For example, he wakes up in the morning, sits up on his bed and hums a tune as he patiently waits for someone to come.

8) He never lets bad situations keep him down. He has had to endure so much in his 8 years of life...4 1/2 months of hospitalization, breathing tubes, surgeries, blood transfusions, pneumonias, seizures, mini stroke-like episode, & the list goes on. But, he still remains the Christian that I described in the previous 7 points.

Contrary to my son, I have struggled with each of these areas. Many times I wonder, "Who really has the special needs?" Is he really the one with the "abnormal" brain. I think people have it all wrong. I wonder which one of us the Lord would pick as actually having a mental problem???

Thank you, my precious son, for showing me what it truly is like to be a Christian...in more ways than one. Over these 8 years, you've taught me more about what it means to truly live than anyone else I know. I am grateful for what your life continues to teach me. 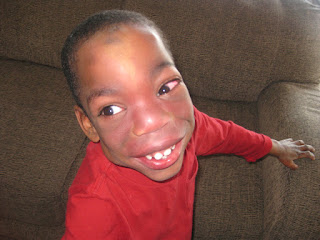 What Are You Reminding Yourself?

Check out this post from my pastor.
Posted by Caryn at 8:17 PM No comments: