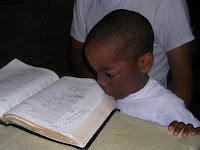 No wonder Christian was so peaceful; that morning he took the verse, "Taste and see that the Lord is good" (Psalm 34:8) literal. 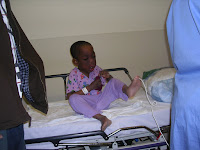 Still joyful as he gets prepped for surgery. 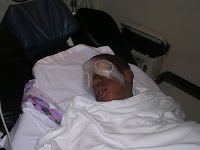 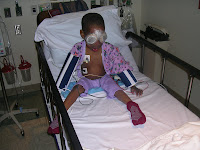 Now you can see why everyone was so baffled to how Christian was so peaceful and never complained. As he came out of the anesthesia, he couldn't see or move his arms. 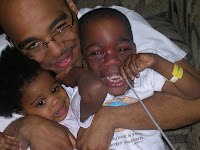 24 hours after surgery and playing again!

Praise God from whom ALL blessings come! Well, God definitely covered Christian with, "favor as with a shield" (Psalm 5:12). There is no doubt that our Lord used the many prayers of the saints to show off His power. Below are several highlights & praises from today.

1) Even though the surgery was moved from 9:30AM to 11:30AM and he couldn't eat or drink anything, Christian continued to smile, giggle, and play the whole morning.
2) He was so cheerful that he hummed & waved his legs in the air while being wheeled to the Operating Room. That was a funny sight to see.
3) When they got to the O.R., his doc. said that no one could believe how peaceful he was. She said, "He was unbelievably peaceful that he held his own gas mask while they were giving him anesthesia!"
4) The doc. checked his eye pressures and concluded that it was best to do the surgery. The best things about the surgery are: 1. His pressures won't have to be checked as often, 2. No more expensive eye drops needed, 3. The implanted device will serve as a constant aid in keeping his pressures normal which all should lead to 4. Better overall vision.
5) When the surgery was over, the doc. came out and said that the surgery went, "As Smooth as Silk." No problems, No complications, and a lot faster than expected.
6) For cosmetic reasons: When a person has this implanted device, they are given human cornea tissue to cover up the device so no one can see it. So, in other words, my child was given better sight, while someone else lost their child. My heart immediately went out to that family that the Lord will continue to comfort them and that they will find lasting peace & salvation in Jesus if they haven't already.
7) The doc. said that from years of having high pressures, cracks have formed on Christian's corneas. However, she said, "He's very lucky that the cracks didn't go through the center of the cornea (which mostly happens), but his were all on the outsides." That's not luck, but my LORD!
8) The recovering nurse said that Christian was the most delightful child she's ever cared for. She's never had a child that had to wear 2 eye patches & braces on both arms (to keep him from rubbing his eyes) that remained so content, tolerating, and good. He never cried, screamed, or even moaned. She was in total shock and we continued to give God all the glory.
Christian is doing well and sleeping soundly. He goes for a post-op tomorrow morning at 10AM. The doc. will then take off his patches and check his eyes. Please pray that his eyes continue to heal well, that there will be no infections, and that he won't have a desire to rub them.
Thank you so much for all your prayers! God used your prayers to shower His grace & mercy on us. We are grateful!
Posted by Caryn at 9:33 PM 16 comments:

Christian is scheduled to have surgery on both eyes (due to glaucoma) on Monday, April 28. The doctor will do a thorough eye exam to see if surgery is even necessary before she proceeds. Please pray for the following areas.

1) Christian stays healthy for the procedure.
2) He possibly won't need surgery in both eyes.
3) Guidance for the doctors as they insert a stent in order to control his eye pressure.
3) There will be no complications, but a quick recovery.
4) If surgery is necessary, pray that he will have peace having to wear patches on his eyes for 24 hours.
5) This procedure will result in long-term improvements of his vision for God's glory.


Thank you so much! I'll keep you updated.

For the eyes of the Lord are on the righteous, and his ears are open to their prayer.
I Peter 3:12a
Posted by Caryn at 6:30 PM 11 comments:

A couple of weeks ago, I put my baby girl on a 3-day fast. A Gerber Puffs fast that is. We call them "stars". She gets ecstatic whenever she here's that word. Well, when she was sick, she didn't want to eat anything, but stars. I let her eat as many as she wanted because something was better than nothing (Right moms?!?!). So, after she felt better, I had an ordeal trying to wean her from the stars. So, I decided to not give her any stars for awhile. She would spit out all the other food I gave her. I had to actually put on an apron to guard myself from the baby food attack. One day, I looked like I was wearing an advertisement for a Baby food Spray paint. Anyway, she eventually starting eating other foods again. So, after 3 days of fasting from the stars, I gave in after a crying spell and she was a happy camper (or should I say happy "star" child). Below are some pictures of her getting her beloved stars back.


This is actually her sad face from star withdrawal. 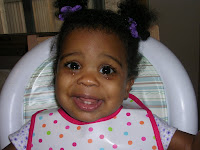 I gave her one star; she can't believe it! 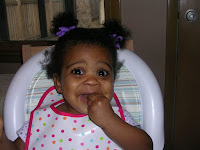 I put lots of stars on her tray. She is overjoyed!! 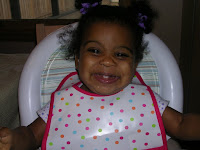 The fast is officially over!!! 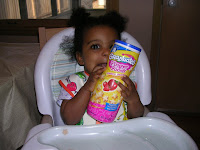 The common word in all the questions I get is “they”. “They” really doesn’t mean anything when he comes to God. If we were trusting in “they” are hopes and faith would be in what “they” think or say. I’m so glad that the Heroes of Faith (Hebrews 11) weren’t trusting in “they”. If that was the case, we wouldn’t have such great examples to encourage us in our walk today. Their faith was, “the assurance of things hoped for, the conviction of things not seen” (Hebrews 11:1).

Although Christian is significantly delayed, he has already exceeded the point where the doctors thought he would. His syndrome can be progressive and can cause regression of abilities over time. So, no one actually knows but God. And you know what, it really doesn't matter. Whether Christian has a radical improvement in development or he stays exactly where he is, it's ALL GOOD because God is GOOD and He only does GOOD and He works all things together for GOOD (Psalm 119:68, Romans 8:28). AMEN!

Some trust in chariots and some in horses, but we trust in the name of the LORD our God. Psalm 20:7
Posted by Caryn at 11:50 PM 2 comments:

BOG on the Blog!

A while back, some friends of ours asked Kempton to be the speaker for their Youth Ministry's Conference in Dallas, TX. However, the airplane ticket that they purchased was for American Airlines and that airline cancelled many of their flights this week because of some technical issues. So, that left Kempton without a ticket at the last minute. His ticket was changed 3 times before he got the one he would be flying on . The plane was to take him to Milwaukee, WI and then to Dallas. However, there was too much fog for them to land in Milwaukee so they had to fly to Michigan. The Michigan airport didn't have enough planes to fly all the people on to Dallas so they flew them back to Milwaukee. When they got there, the hundreds of people were told that they would be on stand by for the rest of the day, but not to count on anything til in the morning.
Well, our friends were really wondering what they were going to do because Kempton was the main speaker tonight and they didn't have an alternate person. So, we prayed & prayed & prayed.

In the meantime, an older woman overhead Kempton talking on the phone about his plans. She went to him and said, "I want you to have my ticket". She said that she would do whatever she needed to do even if she had to stay in Milwaukee. The airport staff was baffled! They said, "This doesn't happen. There aren't people like this in the world." Fortunately, she was still able to fly on the same plane. The strange thing is when Kempton got his seat on the plane, he saw her walk pass him & wink as she got on the plane. But, when he went to the restroom during the flight, he didn't see her nor did he see her after they landed. Who was she? Was she a real person or an angel?

Earlier when she offered Kempton the ticket, she told him that she served in Prison Ministry. Kempton gave her some Desiring God resources that he had on hand. He told her that she could email him for more resources. Will she email? Does she even exist? Only God knows!

Take a look at the following verses. Isn't it so interesting how it fits the context of this situation.

Keep on loving each other as brothers. Do not forget to entertain strangers, for by so doing some people have entertained angels without knowing it. Remember those in prison as if you were their fellow prisoners, and those who are mistreated as if you yourselves were suffering. Hebrews 13:1-3.

Well, no matter who she is, God sent her to bless Kempton. God does whatever He wants, whenever He wants, and uses whomever He wants to show off His power & His glory! Praise the Lord!

(For the new viewers of my blog, BOG means Brag On God!)
Posted by Caryn at 7:35 PM No comments:

Praise the Lord for 7!

As a child, I noticed that the number 7 was used quite often throughout the Bible. So I figured that it was a special number to God :-). Ever since then, 7 has been my favorite number. Well, this month The Turners have a reason to celebrate the number 7. Christian has been seizure free
7 months!
As I mentioned before, Christian is medically "suppose" to have non-stop or barely controlled seizure activity. Praise the Lord for His favor! Kempton & I pray regularly that the Lord will "cover him with favor as with a shield" (Psalm 5:12). God has certainly done that!
However, Christian's seizures have not always been controlled. I vividly remember when my precious 10 month old baby had non-stop seizure activity for an entire week. I wrote the following poem during that excruciating time.

Each precious breath you take
Will it be your last
That haunts my mind
Blue, once known for calmness & peace
Not upon your face
It is the sight of agony & despair

The battle started at your beginning
We are still fighting
For life, for comfort, for strength
As the pain keeps coming
My prayers grow faint
My eyes burn with tears
Holding on to a thread
Trying to hope, to trust, to believe
Harder as the days grow longer
So tired & weak

So, that is why we are giving God all the glory, honor, and praise today! Whether Christian has another seizure in 7 days, 7 months, or 7 years, I desire a heart of continuous joy, contentment, and trust in my Faithful Father. May the Lord be our ultimate joy!

The LORD is my strength and my shield; my heart trusts in him, and I am helped. My heart leaps for joy and I will give thanks to him in song. Psalm 28:7
Posted by Caryn at 4:16 PM 2 comments:

Pics. of the Week! 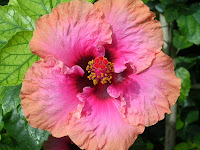 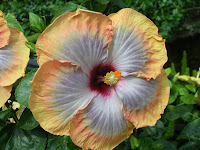 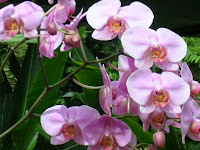 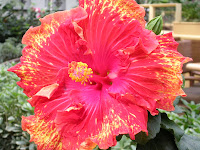 "He has made everything beautiful in its time..." Ecclesiastes 3:11a